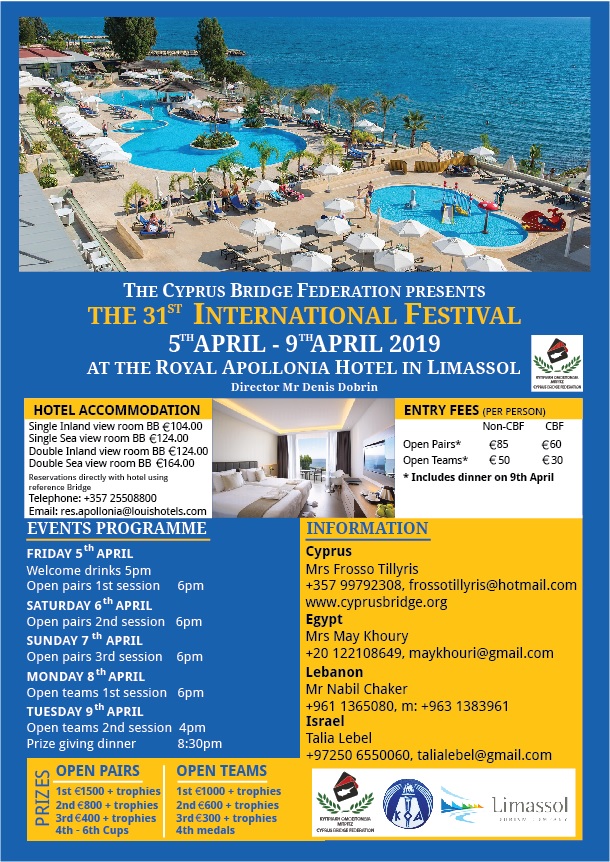 Posted at 10:09h in Uncategorized by bradmin 0 Comments
0 Likes
Share

Anticipation, satisfaction, euphoria (coupled at times with frustration or disappointment among partners) were all sentiments expressed by participants at the International Bridge Festival held in Limassol these past few days.  Organised by the Cyprus Bridge Federation, the annual event was held from the 5th to 9th April at the Royal Apollonia Hotel in Limassol where keen bridge players tested their skills of deduction, maths, logic, and memory (and endurance) at this fascinating Mind Game.  Participants were numerous – 128 entrants – and came from as far away as the USA, China, Norway, Egypt, Lebanon, Russia, Monaco, Greece, Israel, UK, Romania, and Ukraine to compete in a three-day tournament of pairs, followed by a two-day team competition.

At the end of the festival, all players enjoyed a complimentary dinner at the Londa Beach Hotel where cash prizes and trophies were distributed to the winners of the event.  Mental exhaustion was forgotten, spirits were high around the dinner tables, and much laughter and conviviality were visible.  For some, bridge was still foremost in their minds and discussions centred around the frustration of a wrongly played card or the joy of a skilfully played hand.  But this was always coupled with the social pleasure of joining current friends and meeting new ones who shared their passion for bridge.

The Cyprus Bridge Festival is an annual event held normally in the Spring.  This year the weather was good and the centrally-located hotel allowed guests to visit Limassol and enjoy its seaside attractions.  We welcome the growing number of bridge players from foreign countries and look forward to their continued participation in this event.  For those in Cyprus who play bridge or are curious about the game and might wish to learn, bridge lovers encourage you to join our group of dedicated players and to increase the dwindling number of players in Cyprus